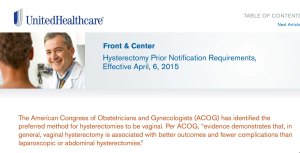 United Health, the nation’s largest health insurer, is changing rules on coverage for hysterectomy. As of April, 2015, UnitedHealth Group will require doctors to obtain additional authorization before performing most types of hysterectomies. Only vaginal hysterectomy performed as an outpatient basis won’t require additional prior approval. Hysterectomy, a procedure done in the U.S. more than 500,000 times per year, is a gynecologic treatment commonly used for heavy bleeding or persistent pelvic pain.

Some surgeons haven’t mastered the skills of vaginal surgery because in residency programs it is not taught as often as laparoscopic and robotic surgeries. Some hospitals push robotic surgery because they have to pay for the expensive equipment it requires. It is thought to be good for marketing the “modern” image the hospital wants to portray. One of our local hospitals had “the robot” on display in their lobby for weeks for marketing purposes.

When a vaginal hysterectomy is performed the cervix is removed, and along with that removal the major risk of cervical cancer is also removed. The cervix is left behind in most laparoscopic or robotic hysterectomies. Some surgeons erroneously think leaving behind the cervix is a good thing for the patient. A review of nine studies showed “no evidence of a difference in the rates of multiple outcomes that assessed urinary, bowel, or sexual function between TH or STH (leaving the cervix behind) either in the short term or the long term.” Leaving the cervix behind also increases the likelihood of cyclical bleeding up to two years after surgery.

Part of the reasoning for United Healthcare limiting the use of laparoscopic and robotic hysterectomy comes as a backlash against power morcellators. Morcellators, a tool used during laparoscopic hysterectomy, recently had their use restricted by the FDA after information about their association with spreading undetected uterine cancer was revealed.

A series of articles recently described the hidden dangers of using this surgery. Despite the new information about the risk of spreading cancer, changing surgical skills to promote vaginal hysterectomy is going very slowly.

Whatever the reason for not being able to do recommend a vaginal hysterectomy for their patients, be it lack of training of surgical skills, or the lure of cool surgical toys or fancy marketing, some surgeons don’t want to refer their patients to surgeons who have the skill to do a vaginal hysterectomy because of lost money or perceived loss of prestige.

United Healthcare’s notice, affecting their 40 million female members covered by the insurer, said that physicians who don’t get preauthorization for the procedure (anything except vaginal hysterectomy) will have their claim for compensation denied. If gynecologists can’t do the right thing for their patients, and their professional society (ACOG) can’t persuade them, it’s not surprising that insurance companies are stepping in to point them in the right direction.

Our group of gynecologists, Doctors Seigel, Gottlieb and Cannon are glad we can offer vaginal hysterectomy for our patients, and encourage other gynecologists to also recommend this preferred procedure whenever appropriate.

I'm an ObGyn with offices in Rockville and Germantown, Maryland. Our modern practice includes electronic medical records, advanced ultrasound, and in-office procedures. We offer gynecologic services, as well as normal and high risk obstetrics. I have three great partners, Drs Emily Gottlieb, Jennifer Jagoe and Supriya Mishra. We are part of George Washington University Medical Faculty Associates. I enjoy reading, swimming, and blogging.
View all posts by Mark Seigel, MD →
This entry was posted in Gynecology, Our Office and tagged Gynecology, Obstetrics and gynaecology, treatment of vaginal bleeding, vaginal hysterectomy. Bookmark the permalink.